Man, you thought latitude and longitude was rough, just check out this declination stuff!

I'm sorry to be the one to tell you that your compass doesn't work quite right. It doesn't really point to the north pole or the south pole.

Not only that, next year it will point someplace different than it does this year! And, someday it may be completely backwards!

Why are there two different poles? Good question!
The magnetic north and south poles are the ends of the magnetic field around the earth. The magnetic field is created by magnetic elements in the earth's fluid outer core and this molten rock does not align perfectly with the axis around which the earth spins.

There are actually many different sources of magnetic activity around and in the world. All those influencing factors combine to create the north and south attractions at each spot on the globe. The actual strength and direction of 'north' is slightly different everywhere, but it is generally towards the 'top' of the planet.

The difference between the north geographic pole and the north magnetic pole is called magnetic declination or usually just declination.

Depending on where you are on the earth, the angle of declination will be different - from some locations, the geographic and magnetic poles are aligned so declination is minimal, but from other spots, the angle between the two poles is pretty big. 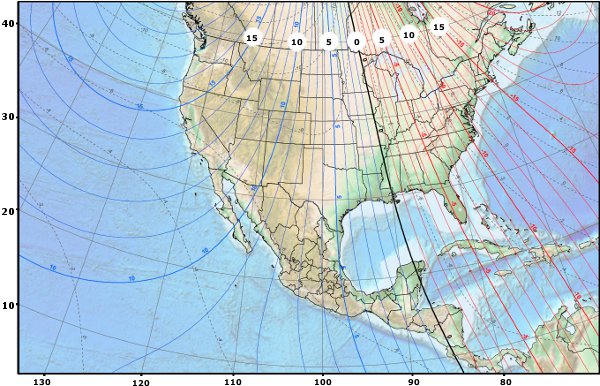 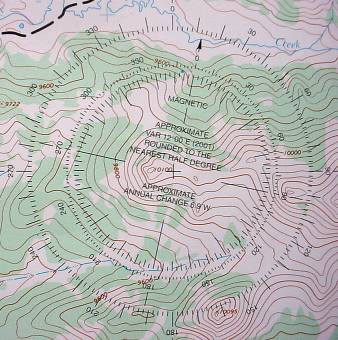 This makes it a bit more challenging to find your way because your compass tells you North is a different direction, depending on where you are. Topographic maps used for navigating should have the declination printed on them like this example. This declination is for an area in the Bighorn Mountains in Wyoming where the declination is 12 degrees East in 2001, when the map was made.
(Click the image for a bigger version)

Does it make good sense to use a map's declination information if that map is more than a couple years old? NO, you should use recently published maps or know the current declination for the area and use that information for your navigation.

There are a few ways to solve this extra challenge of finding true north - either changing your compass or using math in your head.

On many compasses, you are able to adjust the declination by twisting a ring, using a screw, or some other method of changing where the orienting arrow sits in relation to the ring.

If you used a compass set with 0 degrees declination in Wyoming where the declination is 12 degrees East, the compass would tell you that you're heading North when you're actually heading 12 degrees East of North.
You'd quickly wind up off course and lost.

By adjusting the compass to match the declination on our map, the orienting arrow now appears to be offcenter from North, which is how it should be.
Now, when you put RED in the SHED (needle inside orienting arrow), the North indicated at the index pointer is true north and matches your map.
You can continue to check your location and chart your course correctly.
Whenever you stop and check your heading or take a bearing on a distant object, the degrees read on the dial will be the actual true degrees. The only thing that looks a bit odd is that the north end of the compass needle does not point directly at the N when you are heading due North.

If you have a compass with no declination adjustment or you just like math, then you can do the declination calculations in your head.
If you are in Wyoming with a 12 degree East declination, add 12 degrees to the heading you read on your compass dial to determine your true heading.

In this example, the reading is 250 degrees.
But, you are actually facing 262 degrees.
So, to actually head 250 degrees, you need to get a reading of 238 degrees and then you're heading the right way.

Inclination is the angle of pull down toward the earth that the magnetic field exerts on a compass needle. At the north magnetic pole, the north end of the needle is pulled straight down toward earth.
Using your brilliant mind, you probably figured that a compass doesn't do much good if it is pointing straight down. And, actually, for hundreds of miles around the magnetic poles, compasses are worthless. For even more hundreds of miles around that, compasses can be erratic.
So, if you are planning an arctic or antarctic expedition, don't count on your Silva or Brunton for getting you there and back.

Back to the magnetic north and south poles - remember I said they were caused by the earth's molten outer core? Well, things are always shifting and churning down there. So, as the liquid rock moves, so does the magnetic field.

This map shows how the north magnetic pole has shifted over the past century. Notice that it has picked up speed and has moved more in the last 15 years than in the 50 years before that, now moving about 25 miles per year on its way out of Canada and heading to Russia.

So, how does this effect compass use and navigation? Well, if you follow your compass north this year, you will be drawn towards a different place than 15 years ago. Declinations are constantly changing and that means what is written on a map you buy this year will be incorrect next year. The difference depends on where the north pole moves to and what your current declination is.

These moving magnetic poles continually effect navigation. It's more serious for airplanes and ships, but even for hikers and backpackers, it causes problems. Using a 10 or 15 year old map is a bad idea since the declinations are no longer accurate.
If the north pole movement continues at its present speed, it moves 250 miles every 10 years, but it has been speeding up so no one knows what the next 10 or 20 years hold in store. Historically, the magnetic field of the earth has churned over and reversed and some scientists say we are well overdue for such a reversal.

Comments:
Dec 15, 2015 - Annie
How would you take a bearing or heading if you were between the magnetic north and true north?  Just wondering.
Dec 17, 2015 - Jerry Avins
Answer to Annie: Shifting from true to magnetic is just a change of reference, It doesn't change just because the bearing you want is between the two. U.S army maps also have Grid North, because the grids printed on them aren't always aligned with true north. Does anyone know why?
Dec 17, 2015 - Compass Dude
@Annie - There are some locations on earth where the magnetic pull is so far off that using a compass is not practical.  If you were so far north that you were between the magnetic pole and geographic pole, your compass would still point to the magnetic pole.  It would also be pulled down toward the ground and most likely not give any useful direction.
In that part of the earth, using a GPS or monitoring sun movement would be more useful than a compass.
Jan 19, 2016 - Kelly Smith
You made the following statement, "So, to actually head 250 degrees, you need to get a reading of 238 degrees and then you're heading the right way."

I think this is incorrect. If you subtract 12° from 238, you would get 226.
Jan 30, 2016 - Compass Dude
@Kelly - What is written is correct.  If you wanted to head 238 degrees, then you would subtract 12.  The example says you want to head 250 degrees, so you would subtract 12 to get 238.
Feb 17, 2016 - Michael cruse
Very interesting to say the least I quit using a very expensive telescope around 1999 because I couldn't find true north but what's really true if you Google does the poles shift every thirty thousand years you end up with conspiracy theories of all sorts between earthquakes tsunami impacts the moon who tells the truth I once read that when Krakatoa went off it released more pollution in earths atmosphere than there has been since mans been here if that's true then allot of conspiracy is a crock nirubu and the dwarf star in our solar system seems more feasible than ever what else could really move 6.6sextillion tons so fast but then my learning processes in school where filled with all sorts of lies only later on in life did I find truths like for example Christopher Columbus discovering America a lie like Santa but really who knows the truth its really hard to aqire truth in this matter as to why its happening or its true source
Feb 21, 2016 - Dan
Hi there Compassdude,

In regards to declination - does that mean that when orientating a map (finding north in relation to your position on the map) that we should use the magnetic declination reading as our North point ? For example, I live in New Zealand and we have a general declination of 20 degrees east. Does that mean that when I orientate the map, I make sure that the magnetic needle stays inside the orientating arrow which points to magnetic north and not use grid north?

Thank you for your time,